There was a time where the term “dive bar” conjured the idea of a
place you and your friends didn’t necessarily want to hang out in. It meant it was smokey. It meant they had a limited amount of beers on tap and most of them were domestic. It meant any shot you wanted was going to be whiskey. It meant that the locals in town hung out there because it was as familiar to them as their own living room furniture. It meant that you wouldn’t have to wait five-deep at the bar with bass
blasting in your ear and the trendiest new fashion styles on all those around you.

Wait, did I say this was a place you DIDN’T want to hang in? Sounds like
my kind of party.

Through the last few years, dive bars have become the go-to places for
a growing section of the society known as “awesome people.” Just take
a look at how well the Your Welcome Inn on Bethlehem’s south side does
on any given Friday and Saturday night. A picture of the inside (and
outside, really) of “The Welcome,” as it’s affectionately called,
should be on Wikipedia under the “Hey, this is a dive bar” page. It’s
dingy. It’s dirty. It’s loud and it’s smokey. But, it’s a place that
many people have decided is the place to party and the place to be.
These types of crowds don’t need special events. They don’t need fancy
DJs and they certainly don’t need much more than a PBR pounder.

Now, this isn’t to say that the places that offer those types of
events are any less fun, it’s just that a quality dive bar provides an
alternative to those who are looking for, well, an alternative. 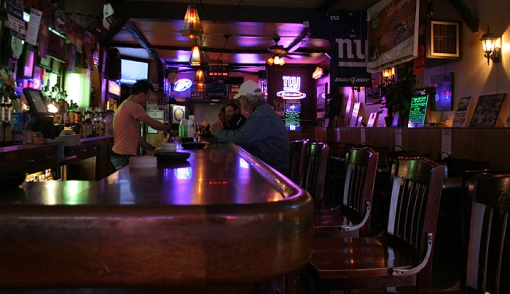 Following in the footsteps of the new type of local dive bar is Joe’s
Tavern on Broad Street in Bethlehem. Just up the block from some
fancier places such as Apollo Grille, Edge and even Bethlehem Brew
Works, Joe’s provides a  home away from home for those who are more
inclined to not be super picky about their drinks and just want to
spend more time conversing over a few choice brews.

Like your grumpy grandpa or your hard-working uncle, Joe’s Tavern
hasn’t changed as much as the appreciation for Joe’s Tavern by those
in the community has changed. Once you enter, you’ll still see the
same long bar that’s been there since 1960, the same locals who are
there each night and, for the most part, the same types of alcohol
sitting on some of the original shelves.

In recent months, however, Joe’s Tavern has made a move toward the
“future” by merely tweaking a few things. For one, Joe’s now offers
karaoke on Wednesday evenings and is incorporating a few more charity
events on weekends. Joe’s has also brought in a few more bartenders
who are sure to learn your name, and drink selection, sooner than
later. It’s still a shot and a beer kinda place and goes best on a
shot and beer kinda night, but Joe’s understands that there are those
in the area who are actively seeking out a new type of place to hang
out and wants to cater to them as much as they can.

Joe’s has also recently placed Harp on tap and has a decently healthy
selection of bottled micro brews. We said decent selection, micro brew
snobs, not the definitive selection. But, as any good micro brew
connoisseur can attest, it’s sometimes more the spirit and atmosphere
of a beer that can make it worth seeking out. Joe’s Tavern, and those
local dive bars in the area that are welcoming new patrons  are truly
the micro brews of Lehigh Valley. They are worth seeking out.

Thanks Crystal, for being our lovely model! All clothes on her were purchased from The Attic in Bethlehem, and her hair was styled by Sara from Eskandalo!

George Wacker is owner of LehighValleywithLove.com where you can find
all sorts of fun local Lehigh Valley news!